A very BIG Thank you

Massive thanks for supporting the Mangotsfield Village Festival 2016.  We are very sorry we had to close the show earlier than normal this year but the continual heavy rain was making it potentially dangerous for musicians to perform on the stage.

Use the Links on the menu to view the photos.

We would like to thank all the organisations and schools who either took part or helped.

If you have any suggestions or queries about the festival please contact chair@mangotsfieldfestival.co.uk or mobile 07765 201435.

Neil Sartain presents with passion and enthusiasm his solo tribute, born of real admiration for the music of reggae legends UB40 and Bob Marley and other artists of the genre.

Neil sings from the heart and this shows in his performances, bringing his music to the younger generation and showing a little of the magic of the King of Reggae and one of the world’s most successful reggae groups.

AVALANCHE is a 4 piece covers band playing the very best of modern and classic rock, pop, indie and funk.  Emulating songs from the 60’s, 70’s, 80’s, 90’s and up until the present day, the band comprises of former session musicians.  Generally regarded as one of the best live bands in the South West, a typical set encompasses hits by many popular artists such as Queen, Kings of Leon, Bryan Adams, Oasis, The Killers, Bon Jovi, U2, The Automatic, to name but a few.  Be sure not to miss out on a chance to join the ‘Landslide’ family!

On the edge are a Good Time, soul, blues and rock covers band. This band brings a professional approach to every event – With a sizzling brass section, soaring guitars, powerful vocals and all driven by a hard hitting engine of bass and drums.

The band has played together for over 25 years in various guises, and brings all that experience to bear, providing a professional sound and fun atmosphere. There are songs as diverse as the Blues Bros, and the Jungle book, Tom Jones and Van Morrison. There are motown classics and even some rock and roll. In fact, On The Edge are the ideal band for any occasion.

Ruzz Guitar’s Blues Revue are a new, powerful, Soul-Injected Blues/R’n’B/Rock’n’Roll band hailing from Bristol UK and fronted by Gretsch wielding guitarist Ruzz Guitar! After many years of playing around the UK and Europe with various bands, Ruzz has decided to put together this band to showcase his unique guitar playing and multi-genre song writing. Taking inspiration from many artists such as Dr Feelgood, Brian Setzer, Paul Pigat, The Fabulous Thunderbirds and Nine Below Zero, Ruzz joined forces with drummer ‘Holly Carter’ and upright bassist ‘Joe Allen’ from the Bristol music scene to create the unique sound of “Ruzz Guitar’s Blues Revue”! 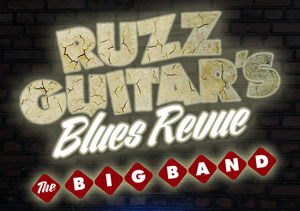